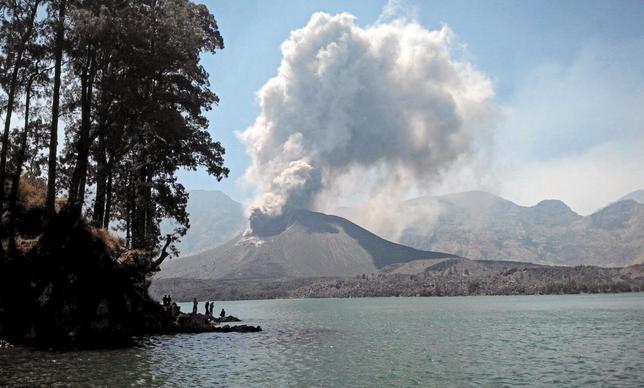 Mt Rinjani, situated on Lombok has erupted with ash and debris being blasted about 1 kilometre into the air and blowing north-west from Lombok towards Bali.

Flights continue to be disrupted. Last night, the Indonesian transport ministry announced that it would close airports in Bali and Lombok until further notice, on advice from the Volcanic Ash Advisory Centre.

Even though Indonesia had the most active volcanoes of any country in the world, Bali had been “terribly unlucky this year”, Dr Tupper, a volcanic ash expert, said.  And vulcanologists have warned that they do not expect the eruption to finish any time soon.

And still plenty of opportunities to grab some ‘me time’ or relax with some like-minded ladies.

Come along with your bestie, your mum or your daughter or be very welcomed as a solo guest.

Note: This tour will be kept small and exclusive. Numbers are strictly limited!

Email your expression of interest to exclusivelybali@gmail.com

and receive new posts straight to your email ~

INDONESIAN plans to make cohabiting outside marriage a crime, jail adulterers and stop the open sale of condoms are causing alarm in Bali where the laws would also apply to tourists.

The island’s politicians and tourism leaders are sounding alarm bells over the controversial proposed new laws, saying the State is interfering in issues of morality which could drive away tourists.

The changes are part of a widespread revision of Indonesia’s Criminal Code, known as the Kuhap, which was last revised in the 1950s. The 500-page document, which contains more than 750 articles, is currently before the country’s lawmakers for debate.

Under the proposals, cohabiting outside marriage becomes a crime carrying a one-year jail sentence and would apply to tourists as well as Indonesians. The punishment for adultery goes up from nine months jail to five years.

Tourism chiefs are concerned that if passed and enforced, by arresting tourists sleeping together and checking into hotels as couples, this would be a major disaster for Bali’s travel industry, which is the lifeblood of the island’s economy.

And moves to ban the open sale of contraceptives, which are currently prominently displayed and sold in minimarkets and convenience stores everywhere, have also been criticised.

Indonesia’s National Commission on Human Rights warns that the controversial aspects of the new code risk returning the country to the 16th Century and driving away tourists who face jail for sleeping together outside marriage. At its most extreme it could even mean police raids on hotels.

Commission member Dianto Bachriadi says the State should not be regulating morality and that if passed, the new laws would mean members of the public are spied upon in their private lives.

Mr Bachriadi says that if the article on cohabitation is not dropped it would apply to foreign tourists in Bali.

“It is applicable for all people in Indonesia, including foreigners. All people who are in Indonesia could be imposed upon, without exception,” Mr Bachriadi said.

“It will be counter-productive to many things, including tourism. It will make tourists run away. Police will actively raid hotels … And it will cause fear for all people. It will negatively affect the economy and all other things. Moreover it is an issue of privacy. About sin, it is their business with God, not the State.”

Bali politician Ketut Kariyasa Adnyana says the Balinese do not want the new laws and the legislature will convey these views to Jakarta.

“The Government’s target is to get more tourists coming to the country. That’s why they create a free visa policy and add more countries to this list. Tourists keep coming to Bali as the Balinese are friendly to all tourists, as well as respecting their privacy,” Mr Adnyana said.

He said it was common knowledge that many tourists in Bali are not married but come together and share hotel rooms on holiday.

“If the new criminal code draft is legalised and is imposed in Bali it will disturb tourism activity. It will build an image that couples outside marriage will be arrested. We in Bali hope that the draft will not be legalised.”

“If it is legalised, of course it will affect foreigners. It means the State has too much interference with people’s lives and religion. … and for sure this will affect tourism.”

Plans to ban the public sale of contraceptives, like condoms, are also under fire. Shops would be banned from offering or showing contraceptives and could only sell them if a customer specifically asks.

Social groups warn such a law is a setback in the prevention of HIV and AIDS and called for the government to focus on crimes like murder and corruption instead of moral issues.

The Institute for Criminal Justice Reform, which is co-ordinating an NGO response to the new criminal code, says it smacks of overcriminalisation.

“Too many of the citizens’ acts are qualified as crimes, especially those acts considered to be against religious morals,” executive director Supriyadi Widodo Eddyono said.

“This should not be the main priority of criminal code reformation. There are many other articles that should be a priority, such as corruption, money laundering and human trafficking. The revision process should focus more on those things,” he said.

The new code also makes black magic and witchcraft, practised widely across Indonesia, a crime, with a jail term of five years for using black magic to cause illness, death or suffering.

Indonesia’s parliament is notoriously slow-moving and the new criminal code is not expected to be finalised and passed until the end of 2017. By this time, the Balinese authorities hope the more controversial aspects will have been deleted during the consultation phase.

and receive new posts straight to your email ~

DenPost reports that the Badung Tourism Service in Bali is asking the Indonesian Department of Trade to review and revise Ministerial Regulation Number 6 of 2015 that will severely limit the distribution and sale of beer.

Under the new regulation slated for implementation in mid-April, beer can no longer be sold from convenience stores or from local vendors circulating on Bali’s beaches. After that date the regulation would limit the sale of beer to supermarkets, hypermarkets, bars and restaurants.

The head of the Badung Tourism Service (Kadisparda), Tjokorda Raka Darmawan, on Wednesday, March 18, 2015, commenting on the new regulation said: “The impact (of the regulation) will not be immediate, but will certainly be strongly felt over the long term. If this is allowed to stand, tourist visitors (to Bali) can shift to other countries, such as Thailand, Singapore and Malaysia.”

Darmawan said the regency of Badung is targeting a 5% increase in tourist visitors in 2015.

Citing the popularity of cold beer among the citizens of major markets to Bali, Darmawan added: “If this (beer) is outlawed or its distribution limited, this will certainly affect their enjoyment. The total number of visitors from Australia to Bali has now achieved one million or around 80,000 Australian visitors per month, many of whom like this beverage (beer). Because of this, the government needs to review the rules and tourism areas should be exempted.”

Similar sentiments were expressed by the chairman of Commission II of the Badung House of Representatives (DPRD-Badung), Nyoman Satria. Insisting that beer with less than 5% alcohol does not make people drunk, said: “It would be better if the Government focused more on controlling local alcoholic beverages such as home-made ‘arak’ that has not been studied by the Ministry of Health. Regulations from the Minister of Trade must meet the aspirations and protect the people and not only seen from a narrow perspective.”

The famous OGOH-OGOH parade is where Balinese men and boys parade large, mythological (mostly demonic) creatures through the streets on the eve of Nyepi.  This is known as Bali’s ‘New Year’s Eve” and is accompanied by much noise and gamelan music.

Ogoh ogoh is a kind of statue / giant doll which is made of light materials eg. combinations of wood, bamboo, paper, and styrofoam, so it is easy to be lifted and paraded. They are usually made by groups of village artists.

As with many creative endeavours based on Balinese Hinduism, the creation of Ogoh-ogoh represents spirituality inspired by Hindu philosophy.

An Ogoh-ogoh generally stands on a pad built of timber planks/bamboos. The pad is designed to sustain the Ogoh-ogoh while it is being lifted and carried around the village or the town square. There are normally eight or more men carrying the Ogoh-ogoh on their shoulders.

During the procession, the Ogoh-ogoh is rotated counter-clockwise three times. This act is done at every T-junction and crossroad. (Rotating the effigies is intended to bewilder the evil spirits so that they go away and cease harming human beings).

Tourists and visitors are welcome to watch the parades, take pictures and witness this unique spectacle. Some of these ogoh-ogohs are actually burnt after the parade as a symbol of self purification. A unique spectacle!

The co-general manager of the Airport Authority (PT Angkasa Pura I), I Gusti Ngurah Ardita, confirmed on Monday, February 23, 2015, that the new VOA booths would soon be operational and manned by immigration staff.

On the average, some 9,000 international passengers arrive in Bali with peak arrival hours often seeing waiting times that are as long as 2 hours for immigration and customs processing. New measures being put in place are intended to reduce the amount of time arriving passengers must spend in the Bali Airport.

During the period January – September 2014 Bali collected US$67.8 million dollars in VOA fees.

The Passenger Service Charge (PSC) otherwise known as Departure Tax, of 200,000 Indonesian Rupiah that is normally paid upon departure from Bali, is to be included in all airline ticket prices.

Garuda is including the Passenger Service Charge in all ticket prices effective February 1, 2015 for flights after March 1, 2015.

For those who have already booked a flight departing before March 1, 2015, they will need to pay the Passenger Service Charge in cash at the airport.

–  and receive new posts straight to your email ~

♥♥ ~ Love you to head over to my FACEBOOK and

Following the 2014 announcement of a proposed withdrawal of Visa on Arrival (VOA), to date, no withdrawal has been made. The proposal was for tourists arriving from Australia, Russia, China, South Korea and Japan to have the VOA waivered, hence FREE entry for up to 30 days.

On the 5th of January, 2014 an immigration document was released stating,

–  and receive new posts straight to your email ~

♥♥ ~ Love you to head over to my FACEBOOK and

In Bali and wanting to support so many of our friends and family in Australia affected by bushfires? Head down to @botanica.bali this weekend to purchase bootleg Bunnings sausage sizzle as part of a fundraising effort for the Red Cross Fire Relief Fund. #redcrossfirerelieffund #redcross #supportaustralia #fires #supportfrombali #redcrossaustralia

Exclusively Bali
Create a free website or blog at WordPress.com.